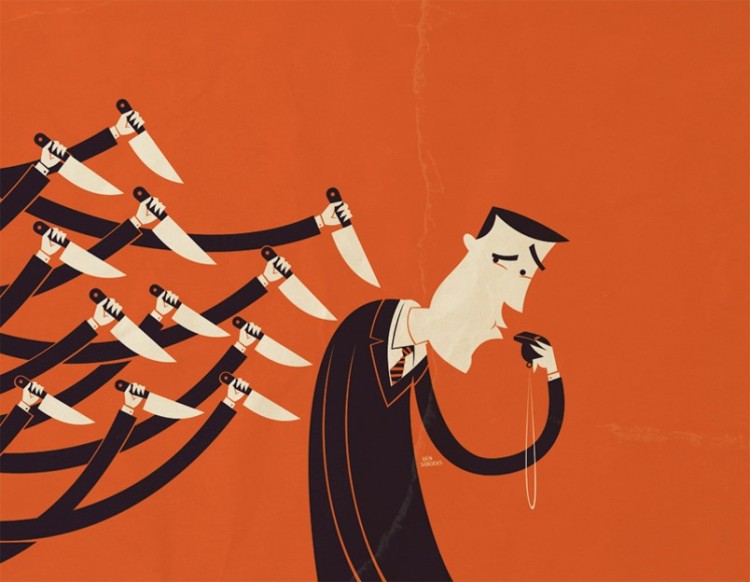 One of our Faith Church members who is in the military responded to my Facebook question asking if people have ever been in a lose-lose situation.  She said this: “In 2011 I was finishing my language training with the military. Half way through we take an exam to see our progress. The problem is that it is the same test that we take at the end of the course. Many of the other students decided to copy down all of the questions they could remember and use them to study from for the final exam. This, of course, is not allowed and is considered cheating.  So the dilemma was whether or not to report my fellow classmates. Reporting would most likely lead to them losing their career and not reporting could mean I would lose mine.”

In lose-lose situations, there are no good answers.  Jesus found himself in one of those in Luke 20:1-18.

When you combine Jesus’ authoritative teaching, and the power of the Holy Spirit at work through him, with the adoring response of the crowds of people following him, it seems as though the religious leaders felt their power slipping.

So it is no wonder the religious leaders confront him!  In verse 2 they ask him about the authority by which he is doing this preaching, teaching and cleansing of the table.  With a simple question from these leaders, it seems Jesus is in a lose-lose situation.  Think about his potential answers here.

If he says “My authority is from God” or “I am God, so I have authority”, they will accuse him of blasphemy. If they accused him of blasphemy, they would jail him or worse, and his time was not quite ready for that.  So he doesn’t say that.

Another thing he could say is “I am my own authority. I just decided to do this”, but they would likely respond, “You don’t have authority, and you are acting in disrespect of those whom God has placed in authority.”  In other words, they would be accusing him of not respecting their authority.  And again they would arrest him.

There are probably many other things he could say, but the wild thing is, both of these responses above would be true.  He is God and he does have authority and he did decide to do this. But either answer would get him in trouble.  They have him backed into a lose-lose situation.

So what does Jesus do to get out of the dilemma?  He doesn’t answer!  Rather, without missing a beat, he asks them question! About John the Baptist!  Why would he create a question about John’s baptism?  Is Jesus just being random?  Is he trying to confuse the religious leaders with a riddle?

Luke gives us an insider’s view into their fascinating discussion in verses 5-7.  They are huddled up like a football team, saying “how do we answer this guy?  He’s got us trapped!”

They were trapped.  They are either going to be guilty of not believing a prophet from heaven, or they will be in trouble with the people.

With the leaders silenced, he takes a hold of the moment and tells them a story.  It’s a simple story of a vineyard owner and tenant farmers who work the land.  The farmers refuse to give the owner his share of the fruit, beating his servants, and ultimately killing his son.  Jesus concludes by saying the owner will step in and deal with those farmers severely.

What is the point of the parable? It’s very similar to the Banquet parable.  God gave the mission of his Kingdom to Israel, telling Israel to be a blessing to the world.  Using the imagery of the parable, Israel was to bear fruit for his Kingdom.  But they didn’t.  They kept it to themselves.  They didn’t do what God wanted them to do.  And when God sent prophets to warn them, they mistreated the prophets.  Now he was sending them his own Son, and Jesus through the parable prophesies what would happen.  They would kill him.  God would bring justice, though, giving the mission of his Kingdom to others, namely the Gentiles.

The people in the crowd respond in verse 16 with “May this never be!”  And Jesus continues by quoting some OT passages from about a stone being rejected.  Just like owner in the parable would kill the tenant farmers, Jesus is saying that this stone would bring judgement on many.  What was the stone?  He was referring to himself.

And what’s more, the religious leaders, we are told in verse 19, knew that he was speaking this parable against them.  Did that ever get under their skin!  Now he was not only on their turf, doing their job, and everybody is loving him to pieces, and not only are they jealous and feeling their power slipping away, but now he is publicly, boldly telling them, right in the middle of their HQ, that God is going to take their authority from them!

So what started as a question from the religious leaders about Jesus’ authority has now turned into Jesus questioning theirs!

Those religious leaders rejected Jesus’ authority, and now God would reject theirs.  It was a scenario they could not allow into the realm of possibility.  They took for granted that they had authority.   They could never allow Jesus to have authority over them.  Though they talked about the Messiah and believed that the Old Testament prophets foretold of a Messiah, a savior from God who would come, and though Jesus’ miracles and teaching looked a lot like that Messiah, because he challenged them so much, because he rebuked them, because he called them hypocrites, they could not submit to his authority.  So they rejected him, and thus they would be rejected.

In this we see a principle that carries through to our day: We need to be people who give Jesus authority over our lives.

Are we bearing fruit?

If we place ourselves under God’s authority, we will bear fruit for him.  What does that mean, bearing fruit?  This is where we can cycle back to a concept that Jesus himself talked about and that he practiced so diligently during his three ministry years: Making disciples.

He spent the better part of three years working with a group of men and women, helping them become the kind of people who could do what he did, which was making more disciples.  So I will ask a question I’ve asked before, who is discipling you, and who are you discipling?  All of us should be able to answer that question.  And as a church we should be able to answer the question: what is our plan for making disciples?  I am so thankful that at Faith Church our Discipleship Serve Team is working on answering that question, and that discipleship and disciplemaking is happening in our family of faith Church.  What we seek is to increase that, and to be more intentional about it.  Want to learn more? I would love to talk with you.

Second, to give Jesus authority, we see that he was a man of prayer.  In the end of Luke chapter 21, which describes the last week of his life, we learn that he went to be alone to pray every night.  I am convinced that one of the clearest ways we can show that we are giving God authority in our lives is prayer.  What are you doing Wednesdays at 7pm?  Except when we have Family Nights, we have prayer meeting.  Can you join us?  How can you pray more in your personal life?  Do you feel like you need someone to teach you to pray?  Again, please talk with me, I would love to start a discussion about this.

Finally, we give ourselves to his authority when we choose to follow his way of life.  It is a way of hope, joy, peace, obedience, love, and so much more.

Remember the dilemma my friend in the military had about classmates she discovered cheating on the language test?  Want to know what she did?

She says, “I did report the cheating, and several soldiers were discharged from the military. Others that had not cheated but knew about the cheating lost their rank.”

Imagine the repercussions she faced socially from those soldiers.  But she had given herself over to Jesus’ authority long ago.  She chose to follow Jesus’ way of truth.  And here’s the rub.  Remember this was a lose-lose situation.  She says, “Even though I did the right thing by reporting the cheating, my Command tried to punish me for also being part of the class that cheated and isolated me from the rest of my unit. I was involuntarily re-classed out of my primary job because the Commander didn’t believe I was a “good fit” anymore or “could exercise good judgement”.”

I asked her if she would do it over again.

She said “It has changed my trust levels in my leadership, but I wouldn’t change what I did because I know it was the right thing. It has changed my perspective on other situations where ethical dilemmas may arise and I have been able to guide younger soldiers into doing the right thing from the beginning. I know God has been in it the whole way because I feel I am happier now than I ever would have been as a linguist.”

How do you need to give Jesus more authority in your life?