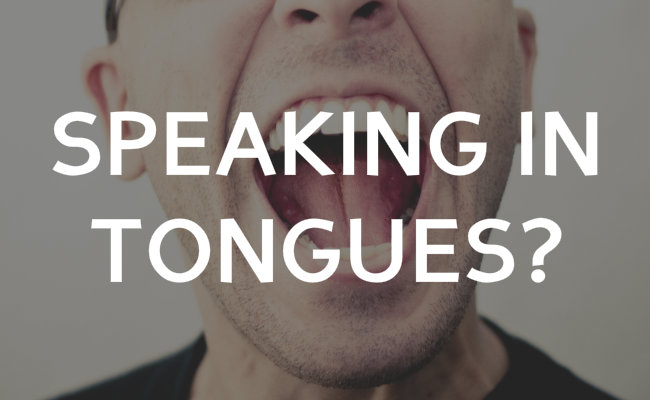 What is speaking in tongues? Or what is it supposed to be? There is a lot confusion, a lot of skepticism and fear. Some people say that it is all fake, that the gift of tongues ceased, and that’s what Paul meant in chapter 13 verse 8 when he said “where there are tongues, they will be stilled.” These cessationist say the gift of tongues was only for the age of the apostles when the church was being established and the New Testament was not yet complete. But when the Apostles passed away, by around 100 AD, and the New Testament was then completed, though it was not fully compiled until about 200 years after that, a new era dawned on the church and tongues were stilled.

Any new manifestation of tongues, then, these cessationists believe, is either fake or worse, of the devil, meant to deceive people.

But there are plenty of people who totally disagree with that. They believe tongues, whether in private devotional prayer or in the public gathering of the church, is legitimate and even important.

In the early 1900s a movement broke out in California soon after the great San Francisco earthquake, and it started sweeping the West coast. It started with a group of people who claimed that the Holy Spirit was bringing revival through a new Pentecost, a new outpouring of gifts, especially the gift of tongues. Stemming from a group that met on Asuza Street in LA, it became widely known as the Pentecostal Movement. A hundred years later Pentecostal Christianity is the fastest growing segment of our world-wide faith. Pentecostalism and its more expressive cousin, the Charismatic movement, have seen millions of people come to Christ and join the church, especially in the Global South. Latin American, China, India, Africa and Asia. Some believe that if it wasn’t for Pentecostal Christianity, we would actually see decline in Christianity worldwide. Instead we are seeing amazing growth.

But is that growth all wrong? Does the Spirit manifest himself in speaking in tongues?

Paul talks about this in our next section of 1st Corinthians, chapter 14, verses 1-25.  As you prepare for Sunday, read this section, and see what Paul had to say about speaking in tongues. Remember that the church in Corinth had some pretty out-of-control worship, and tongues figured largely in that.  What was happening in this church?  Are there principles that we can learn from this passage, whether we believe tongues have ceased or not?  Join us at Faith Church on Sunday, and we’ll talk about it more!

One thought on “Is Speaking in Tongues fake?”