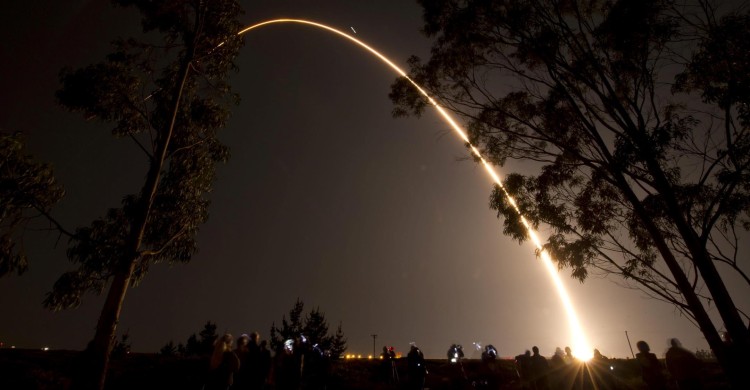 Rocket launches have been all the rage recently, with private companies getting in the new space race.  I have always been fascinated with space shuttles and astronauts, and thus love watching the blast-offs!  A nighttime launch with is fire trail is especially amazing.  See the trajectory?

All week long we have been studying a controversial passage of Scripture, 1 Peter 3:1-7.  I’m convinced that the concept of trajectory is vital to understanding this passage.  Not rocket trajectory, but a missional trajectory.  What is missional trajectory?  Keep reading and I’ll explain.

In this passage we have seen Peter teaching about marriage roles.  Already this week, we have looked at verses 1-6.  You might want to read those posts first to see where we are headed…our trajectory!  Now as we continue in verse 6, Peter remarks that holy women of old were submissive to their husbands like Sarah, the matriarch of the Old Testament, who apparently even called her husband “master”.

Why would he say, “do not give way to fear”?  It means that they can trust in God, put their hope in God, and submit. They don’t need to be afraid to submit.

For those of us hearing this with 2018 American ears, it can be very difficult, to hear this passage like those in the Roman Empire in 65 AD would have heard it.  Our cultural situation is vastly different.  We live in a society where there is a strong movement toward equality.  We are not there yet.   We still live in a patriarchal culture.  But in the last 100 years, our society has moved towards equality.  There are loads of jobs where women are paid less than men for the same job, for example.  We could go on and on about the many ways that our society is not equal.

But where we have made progress is in the area of marriage.  Men, most often, do not look at their wives as property.  As animals.  Instead men generally look at their wives in a much more equal way.  Of course there are still in our culture many different perspectives on the roles husbands and wives should have to maintain a healthy, godly marriage.

There is nothing wrong with having roles in a marriage relationship.  In our culture, it used to be that the man worked full-time, fixed the car and house, and did yard work.  The wife would stay home, cook and clean, and raise the kids.  But nowadays our culture has changed.  The man might want to cook, and they both might have jobs, and the wife might be the better mechanic.  What Michelle and I say to couples in premarital counseling is that each spouse needs to figure out which roles work for them.

Why?  Trajectory.  What do I mean by “trajectory”?  What I mean is that Jesus and the disciples were putting in motion a new way that had a trajectory.  In their day, they had to work within the existing cultural assumptions, but set a trajectory for a new way.

This trajectory has significant practical implications for a healthy marriage.  Because husbands and wives are equal, how should we have a healthy marital relationship?  In all relationships, and especially in the marriage relationship, we need to practice sacrificial leadership.

And what is the other person thinking?  At the same time they are thinking that they are the sacrificial one.

Instead the teaching Peter gives, as we will see tomorrow, when he talks with husbands, is one that should eradicate abuse in Christian marriage.  For today, we focus on trajectory, seeing the biblical teaching of submission as one that was vital for Christian marriage in the First Century Roman Empire, while at the same time setting a trajectory for mutual submission in the future.