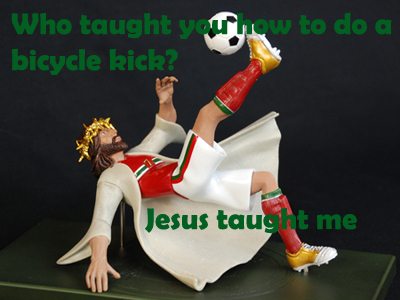 I’m super excited that the Olympics start today.  Soccer is my favorite sport, so while I’m disappointed the US men’s team didn’t qualify, the women’s team looks to make a gold medal run, and I’ll be cheering them on!  In honor of that quest, I thought I’d show you this picture of a Jesus figurine doing a bicycle kick, one of the most acrobatic and impressive ways to shoot a soccer ball.  In particular, notice the caption, which is meant to be humorous.  As fun as it would be to imagine how good Jesus might be at soccer, this picture raises a question.  Obviously Jesus did not teach someone how to do a bicycle kick.  But he did teach a lot of other things, and there is misinformation about what he taught!  We Christians can do a lot of things thinking that Jesus taught us to do them, when in reality he didn’t.

As the title of the post suggests, what comes to your mind when you think about the possible two things that Jesus did not tell us to do, but that we do…a lot?

A few years ago, I read the book Jim & Casper Go To Church, and in the book the question regularly comes up “Did Jesus really tell you to do that?”  The book is the true story of Jim Henderson, an evangelical Christian, and Matt Casper, an atheist, who travel around the United States, dropping in on worship services at twelve churches of varying stripes, shapes and sizes.  Jim and Matt spend time discussing what they experience, and numerous times, in response to what he has seen at a particular worship service, Matt asks Jim “Did Jesus really tell you to do that?”

Most often Matt asks that question in critique of churches that have placed great emphasis on buildings and highly-produced worship experiences.  Matt’s is a penetrating question.  I ask you to think about it because the answer is very easy to come by.  Just take a few hours and read through the four Gospels and you will find the answer.  I would suggest that there are two things in particular that we Christians do a lot of that Jesus did not teach us to do.

What are those two things?  While Jesus spent a lot of time talking about the Kingdom of God, and teaching and leading his disciples, he did not instruct them to build buildings so that they could hold worship services.

First, let’s take a look a the practice of building buildings.  On one particular occasion while the group of them were walking near the temple grounds, the disciples remarked how amazing the temple building was.  Jesus’ response went in a surprising direction.  No doubt the temple grounds were actually an astounding work of ancient architecture.  Beautiful and majestic.

If you look at some of the models recreating what the temple mount probably looked like, even the small-scale models are impressive.  The temple mount was the pride of the city of Jerusalem, the nation and the people of Israel.  But Jesus had other thoughts.  He said to the disciples “it will all be destroyed.”

Jesus was saying “Hey guys, don’t put all your eggs in that basket.  God’s doing a new thing, and it doesn’t involve a building.”  Those early Christians took Jesus’ words to heart.  For the first few hundred years of the church’s existence there is absolutely no record of Christians building buildings.  They met in homes.  Building places of worship was not the mission of God’s Kingdom.

Did Jesus tell us to build buildings?  No.  He did not.  And yet, we have, haven’t we?  Lots of them, all over the world.  Is it wrong for Christians to build meeting places?  No.  Jesus did not prohibit the building of meeting places.

But here’s where it gets murky, and where we need to be exceedingly cautious when we Christians purchase property and put up buildings.  Jesus’ comments about the destruction of the temple suggested to the disciples that they not become enthralled by buildings.  Though God had made a building, the temple, to be a central element of his interaction with the nation of Israel in the past, God was now doing a new thing.  God was relating to people through a new means, and Jesus himself was paving the way for that new relationship with God.  After Jesus’ death and resurrection defeated sin, death and the devil, making it possible for our sins to be forgiven and for us to have a restored relationship with God, the temple was unnecessary.  It was at the temple where sacrifices for sin were made, atonement for the nation.  But through Jesus’ sacrifice, the old system of sacrifice and the temple that housed it became obsolete.  In fact, one of Jesus’ earliest followers, Paul, would go on to write that we, Jesus’ followers, are the temple of God.  Amazingly, wonderfully, God lives in and with those people who give their lives to become his disciples.  We no longer go to a building to meet God, he is always with us.  So when we endeavor to build a building for gathering, we should be very sober-minded about it.  It is all-too-easy for that building to dominate the life and ministry of our church family.

Very much related to building buildings, there is a second practice that Jesus did not tell us to do.  He did not teach his disciples to have worship services.  Again, read through the four Gospels and you won’t find a shred of teaching about having worship services or what they should include.  For as much energy and money and personnel as we Christians put into our Sunday gatherings, you’d think there would be at least a little bit of teaching from Jesus about it.  There is none.

But once again, I ask, just because Jesus doesn’t mention it, does that mean it is wrong to have worship services?  No.  While Jesus’ disciples and the other writers of the New Testament mention nothing about building buildings, they do mention worship gatherings quite a bit.  In fact, we read in Acts that the early church did gather regularly, and perhaps, in order to commemorate Jesus’ resurrection, carved out time for a worship gathering on Sundays, which in their culture would have been the first day of the work week.  It would be like us worshiping each week on Monday nights.  Early in the second century AD, before the church was even 100 years old, there is also clear evidence, through the writings of Justin Martyr, who was discipled by John the Apostle, that Christian worship gatherings had standardized orders.  None of this is wrong.  In fact, like the building of buildings, a regular day of the week for worship, and orders of worship services, can be used for good.  But to answer Casper’s question, Jesus did not teach us to do this.  And if we are honest, we have placed an enormous emphasis on it.

At one particular church worship gathering that featured a large building, smoke machines, video screens, and a highly produced service of worship, Casper was particularly incredulous.  “Really?,” he asked Jim, “Did Jesus ask you guys to do this?”  But we need not focus on a spectacle like that.  The reality is that even tiny churches that cannot afford an expensive production can still invest a lot of time, energy and money into their worship gathering.  I would guess that tiny churches invest probably a very similar percentage of their resources into the Sunday worship service as a megachurch.  I do not know this for a fact.  I simply suspect it is probable.  Consider the salary the staff makes, and how much of their time is directed to Sunday morning.  Consider the infrastructure of buildings, utilities, equipment, and upkeep.  Consider the volunteers and all the hours they put into meeting, planning, lessons, practice.  Add that all together, and let us humbly remember that Jesus did not tell us to do any of it.

What remains, then, is to ask, “What did Jesus tell us to do?”