It returns in about a month.  The Walking Dead.  A very compelling show for many reasons, The Walking Dead is the story of a group of survivors trying to eke out life in the middle of a zombie apocalypse.

Zombies have become quite a fascination in our culture of late.  Much of the attraction is just simply thinking “What if it were true?”, what if a zombie apocalypse could really happen?  Then, after envisioning a world where dead people come to life as zombies that want to eat you, the next question asks “What would it actually be like to live in that kind of world?”  The creators and writers of The Walking Dead do an amazing job trying to answer that second question.  The movie World War Z, a book adaptation, sought to do the same thing.  Another way some have tried to answer that second question is to apply it backwards, such as Pride and Prejudice and Zombies tries to do.  I have never read Pride and Prejudice, but when I saw Pride and Prejudice and Zombies, the audio version, in our local library, I knew I had to check it out.  It was hilarious.  I felt the adaptation was convincing enough that I imagined the actual novel must have been set in the middle of a plague-like context.  It’s not.  Just this morning, here’s a report that it, too, is being turned into a feature film.  It seems we can’t speculate enough about what the world would be like in a zombie apocalypse.

But what about the first question.  What if were true?  People coming back to life.  What if people could actually come back to life?

By asking that, I’m not thinking of zombies, I’m thinking of resurrection.  The dead rising to new life. There are many examples of how the undead could be a real possibility, but the central idea about zombies is that they are still dead.  Or undead.  Resurrection is different than an idea of walking dead because in resurrection, a living human dies, and then rises to new life.  Admittedly, it is a wildly odd idea.  That which is inanimate is not able, by definition, to become animate.

Ironically enough, as fascination with the undead or the walking dead seems to be growing, belief in a real bodily resurrection to new life seems to be declining.  Mike Regnerus in First Things recently said that while “a general resurrection of the dead is something orthodox Christians across the centuries have long anticipated…many of the faithful aren’t so sure.”  Regnerus bases his findings on new research, showing that in many churches, 1 in 4 parishioners no longer believe in the resurrection.  Want to know that group that has the highest affirmation of belief in the resurrection?  See this chart: 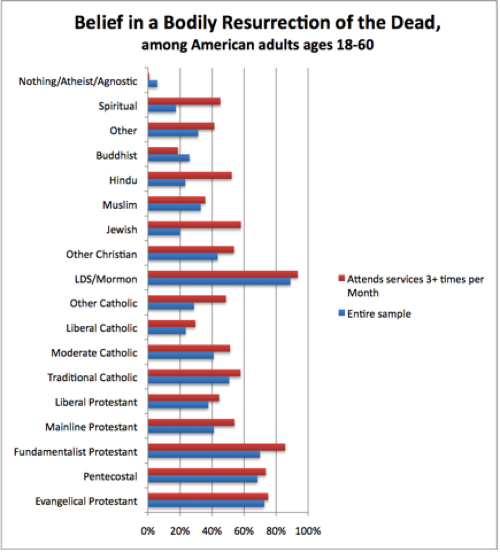 Shouldn’t evangelicals be at the top?  Second place isn’t bad, though we drop to third when considering active attenders (3+ times per month). Again, look at the total percentage.  One in four evangelicals does not believe in a bodily resurrection of the dead.  What could be the reason for this?

The church in Corinth seemed to have a skeptical group as well.  Paul starts this section by saying “How can some of you say there is no resurrection of the dead?”

And yet in the Christian faith, we hold resurrection to be lynch pin of our entire system.  You pull Easter out from the story, and our faith falls apart.  As Paul will say in the next section of 1st Corinthians that we are studying on Sunday, if there is no such thing as resurrection, we have nothing.  A dead savior is no savior, Paul says.  As you prepare for worship on Sunday, take a look at 1st Corinthians 15:12-34 and you’ll see what I mean.

One thought on “Do you believe in the walking dead?”