My tidy Friday office is mysteriously messy on Monday…except this week.  Since starting this series on the blog a few months ago, I have not lacked for material.  Almost every week people drop stuff off in my office, or my kids leave half-eaten snacks there, or things just show up for reasons I cannot explain.  But this week that didn’t really happen.  There have been a few weeks where I’ve stretched a bit and told you about stuff in my office that recently got there, or had been sitting a long time, but didn’t actually appear over the weekend.  So I could have told you about the trumpet that has been in here for months that is waiting for a buyer.  A family from the church donated it, saying that the proceeds can go straight to supporting our missionaries, which is very cool.  So if you want a trumpet, let me know.  It has a stand too.  But because my office was relatively tidy, I decided to do something I’ve been thinking about for a while: a sanctuary edition of The Monday Messy Office Report.

You would not believe what we find each week in our pews, and especially in our pew racks.  Well, then again, maybe you would believe it, because, if you are a part of the family of Faith Church, you sit in the those pews, you know what goes on there.  Each week I go through the pews to get rid of stuff that is easily seen, mostly bulletins that people slide behind a hymnal in the pew rack.  But every couple months, I give those pews a thorough picking through, and I always find treasure amidst the trash…lots of trash.  Those pew racks are designed to hold hymnals and Bibles, people, not trash!  Like I said, there are some treasures.  So here goes:

1. A Penny – Who knows how long that has been in there, but one of the church’s kids was probably supposed to put it in the offering basket…and didn’t. Reminds me of the time I was supposed to my two quarters in the offering on a Sunday morning when I was about 6 or 7 years old.  And I didn’t put it in the offering.  Instead, after church I “luckily found” two quarters in the alley behind our house.  The perfect amount to buy a pack of baseball cards.  Well, I found a penny in a pew rack today, and the church is one cent richer.

2. A Petrified Cheerio – It is hard and discolored.  That has probably been in there quite a while, like the penny.  Actually, the presence of that single Cheerio cheers me.  I like Cheerios a lot, and in fact had some for breakfast this morning.  But more than that it is a simple reminder of the change that has gradually been in the works at Faith Church. It is okay now to bring food and drinks into the sanctuary.  I’m really thankful for that.  People are growing in their understanding that the church is not a building, but the people.  Sure, I believe that we should have a proper understanding of sacred space, but it is wonderful to see a small reminder that the church is the people!

3. The Notes!  I remember passing notes OFTEN when I was a kid in church.  Check these out!

4. Kid’s Art! – This is the real treasure among the trash.  I love seeing what the kids, presumably, are drawing on their “Scribble Cards”.  Take a look for yourself!

Maybe in a couple months I’ll have to see what has accumulated in the sanctuary again! 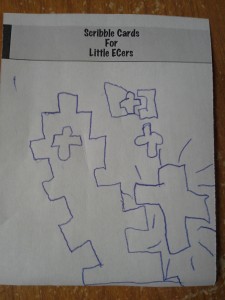 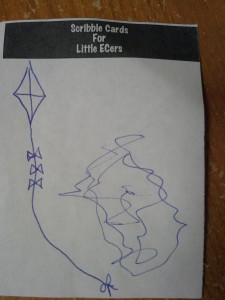