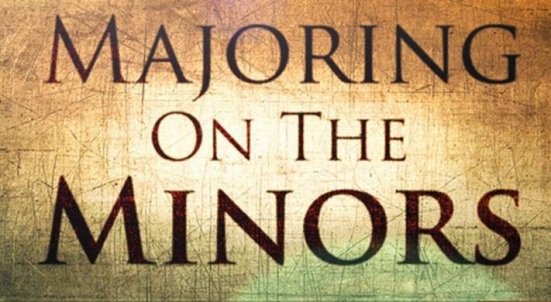 Yesterday during our continuing study of 1st Corinthians, we talked about BNPs!  After a very encouraging greeting, Paul begins to deal with the problems coming out of the church in Corinth.  First up, people claiming that they are followers of certain Big Name Preachers of their day.  Apollos, Peter, Paul himself and even Jesus.

It seems that groups were forming in the church, divvied up by who got baptised by one of these famous preachers.  Then there was the uber-spiritual group who said they followed Christ!  Paul confronts them all.

Even the group that followed Christ?

His point was that even those who sounded spiritual on the outside, claiming to follow Christ, were being divisive, creation a faction.  Paul’s solution is to remind them to pursue a passionate unity of the heart and mind.  He goes on to say that his purpose wasn’t to baptise, but to preach Christ.  His focus was on the mission of God.  And that is the one thing that we Christians from a variety of backgrounds and perspectives can unify around.

But that will only be possible unless we are a people committed to unity of heart and mind.  We need to major on the majors and minor on the minors.

The problem is that too often we major on the minors.  We can spend a lot of time and energy on lesser matters.  Some theologians over the centuries have tried to develop a system for understanding what the major doctrines are and what the minor doctrines are.  A common way to describe this is to use a pyramid with three levels.  On the top we have primary issues, which are the majors.  The next level are secondary issues, which are still important, but they are minors.  The third level, a very minor, and people will have wildly divergent points of view on them.

In the EC Church, our top tier is what we ask people to agree to when they become members of one of our churches.  The list is very small:

1) Belief in Jesus Christ as Savior and Lord;
2) Belief that the Bible is the inspired Word of God;
3) Commitment to daily Christian growth;
4) Commitment to giving Jesus Christ your time, talent and treasure;
5) Support of the local church and the ministry of the Evangelical Congregational Church
denomination;
6) Faithfulness in attendance and participation;
7) Baptism.

What you notice about the triangle is that the sections get larger as you go down the levels.  There are very few major issues, but we have scads of secondary and tertiary minor issues.  Here’s where the problems happen.  When people try to expand the top tier of their pyramid!  Majoring on the majors means that we’ll keep our top tier relatively small, but we will focus the vast amount of our time, energy and money there.  We will refuse to create factions based on second or third tier issues.  We will work graciously with people, even if they don’t agree with our opinions on the minors.

So are you majoring on the majors?  Does this raise any concerns or your questions in your mind?  Let’s discuss it further.